Boipeba, an island off the coast of the bustling town of Salvador, is one of Brazil’s hidden gems. Compared to its more popular counterpart, Morro de Sao Paulo, this island located in the Tinharé archipelago in the southern part of Bahia state is truly one of the region’s best kept secrets. Boipeba is home to a variety of eco-systems so don’t be surprised to see mangroves, sand dunes and desolate beaches. The island is also extremely ecologically diverse owing largely to its geographic setting, located beside an estuary, from which the river drains into the ocean creating an interesting array of terrain and birds. Days in Boipeba can be spent hiking through mangroves, wandering the local village of Velha Boipeba, or enjoying the fabulous beaches.

Boipeba has been able to avoid the tourist limelight due to its remote location and lack of vehicle access. However, it has been receiving much hype in the recent years as the new, hot, un-spoilt Brazilian destination. Many bemoan the toursitifaction of Moore De Sao Paulo and those in the know say Boipeba is what Morro was 20 years before. While word is slowly spreading, the New York Times even covered this little known island as the next Brazilian vacation destination back in 2011.

Where to stay in Boipeba

This pousada is often ranked as one of the best posuada’s in all of Brazil because of its welcoming hosts (Charles, Mark and Mattias), excellent food and the pousada’s jungle-like feel. Further, this hideaway is great for either couples looking for a romantic retreat or families seeking comfortable and inexpensive facilities. Romance seekers should request room 8 and room 7 is probably the most secluded. 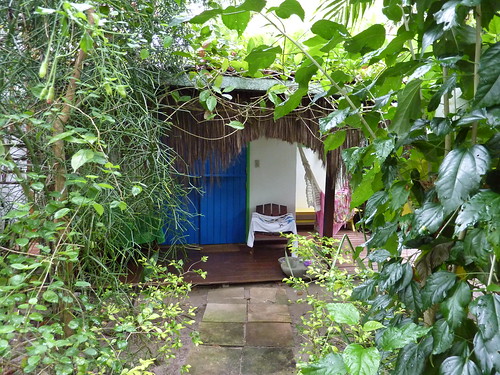 This pousada is a bit more isolated than Santa Clara, perched atop a cliff with panoramic views of the entire island. The views from almost every angle of the resort are spectacular and their restaurant serves-up consistently delicious food. On every morning of our stay the breakfast was abundant and markedly different from the day before. The one draw back is that this pousada is probably one of the priciest on the island and is a good 10 minute walk to the beach.

This quaint beachfront pousada provides a mid-point in accommodation between Mangabeiras and Santa Clara. It offers guests a variety of neatly appointed huts directly on the beach. The owner Chris is lovely and the pousada prides itself on its attention to detail – including fresh flowers placed in cool water to wash the sand off before entering the hut, two showers (hot and cold), an outdoor shower, crisp linens and a breakfast that tops any traveller’s list of their best meal in Brazil. Chris can help you arrange your transport to the island and any day trips.

The food in Boipeba is great but relatively simple. Most restaurants serve up delicious grilled fish and moqueca. These are some of the best:

Paraiso – is an outdoor restaurant located on Morere beach. Make sure you try the fabulous shrimp moqueqa

Santa Clara –located in the Santa Clara pousada, this resto offers delicious meals set in a lush garden. The menu changes daily and they offer a set three course menu for R$ 50 p/p. Make sure you try the chocolate brownie – a staple any night of the week.

Guido’s – is a landmark on Cueira beach. The restaurant itself is pretty simple – plastic chairs and umbrellas facing the beach but the prices are relatively high, probably because Guido is the only joint in the area. While there are tons of yummy seafood options the grilled lobster is what this resto is known for. The lobsters are small but yummy (R$ 75.00 for lobster for two).

There are several options in order to reach this beautiful island. Depending on your timing, it may be interesting to take the longer more inexpensive route as it is very scenic; however, if you are pressed for time there are some very time-effective ways to get to the island

You should also keep in mind that if you arrive in Salvador after 2:30, it is recommended that you spend the night in Salvador and continue on to Boipeba the next day due to the length of the journey and the availability of transport. We stayed at the quaint Casa do Amarelindo, which offers charming accommodation in the heart of Pelo.

It’s always pretty warm in Boipeba. However, the rainy season is from April to July when you may encounter heavy rains. We spent a week around Boipeba and Morro de Sao Paulo in the beginning of October – while some days were very hot, others were cool and at night I usually needed a light sweater. The crystal clear waters of the region are best visible from November to March.

Boipeba welcomes its visitors with open arms and travellers embrace the beauty and openness of this island!

Western Europe Backpacking Europe Many backpackers start their life of backpacking in the navigable continent of Europe. It’s relatively easy to get around, the food won’t make you run to the bathroom and you are bound to find another tourist just as lost as you are. For those testing their propensity for backpacking Europe is

Swimming with Whale Sharks in Mozambique

Swimming with Whale Sharks Ever seen a whale shark? If no, don’t sweat it as they tend to be difficult to spot even in world class diving destinations but swimming with whale sharks should top any traveller’s list.  In fact, if you ask any diver, nine times out of ten, their dream dive includes a

Fiji, known for its thirst quenching “Fiji” water, gracious hospitality, Kava ceremonies and idyllic islands is a spot in the South Pacific that shouldn’t be missed. While the images of of Fiji you would normally see on t.v. or in gossip magazines detailing latest whose-who honeymoons / vacations spots display crystal clear waters and white sand beaches my first glimpse of Fiji was anything but…